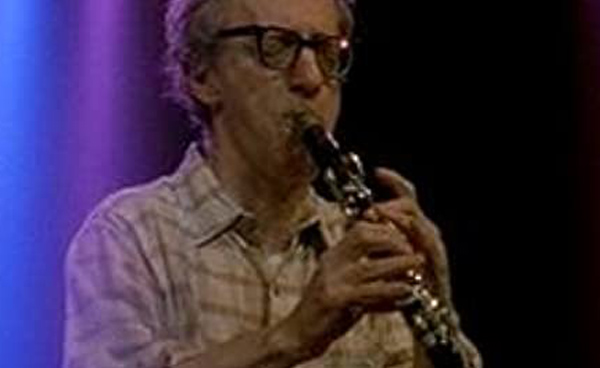 In her unexpectedly delightful documentary about Woody Allen as jazz musician, Barbara Kopple demonstrates cinema verite at its most seductive. Her “Wild Man Blues” incites its audience to take a grand tour of Europe, listen to jauntily exhilarating music and regard Mr. Allen in a colorful new light. There he sits, legs crossed but feet tapping, playing vintage New Orleans music with a joyfulness and abandon that have no place in his own films. In these exuberant, unguarded moments, Mr. Allen comes alive through his art just as his recent alter egos have on screen.With her camera unintrusive and her eye dependably sharp, Ms. Kopple captures her subject’s humanity in other ways too. This fly-on-the-wall documentary watches Mr. Allen, his sister Letty Aronson and his future wife, Soon-Yi Previn, as they interact more or less naturally during the course of a strenuous tour. If Mr. Allen had image polishing in mind, the wear and tear of travel creates its own spontaneity . The audience sees a cranky, pampered, aging, witty man under the thumb of the young (and, as he says, notorious) girlfriend.

While Ms. Previn instructs him on everything from what to eat for breakfast to how many strokes he should swim in a hotel pool, Mr. Allen worries more indiodyncratically about fear of gondolas in Venice (he claims to have white knuckles and seems to mean it) and claustrophobia in medieval settings. “Hey, you’ve got a hell of a town here,” he says in Bologna. “I know with a couple of Valium I could really learn to love it.”

Not surprising, he is rarely without a line worthy of his own comedies. “Those little drawings are confusing,” he tells Ms. Previn as they examine the buttons on a hotel phone “The one with the knife in her hand is the one not to press.”

In between hotel vignettes (notably one with Mr. Allen and Ms. Previn trying out absurdly stupendous quarters in Milan) are some fine musical interludes. Playing songs like “Down by the Riverside” and “Home! Sweet Home!,” Mr. Allen and his band perform jubilantly even in the face of serious obstacles, like a power failure in one city and a rich, bored audience in another. Never has Mr. Allen looked more thrilled on camera than when he visits a music store and hears exactly the rare clarinet he has been looking for.

The piece de resistance is a visit to the apartment of his parents, a scene that would make a nice visual aid for any psychotherapist. True, Mr. Allen baits his parents. But it doesn’t take prompting for them to muse that their son should have been a pharmacist, tell him he’s not such a big shot and voice disappointment that Ms. Previn is not a nice Jewish girl. If “Wild Man Blues” is a travelogue, here’s where the journey began.