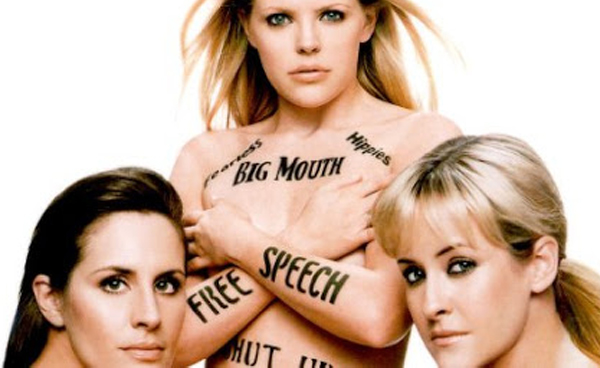 There’s no more soul-stirring way to re-live the last three years, in all their miserable divisiveness, than to see “Shut Up & Sing,” the lovely new documentary featuring the Dixie Chicks. And in the wake of the recent midterm elections, are mainstream audiences–film audiences as well as music audiences–ready, finally, to cut lead singer Natalie Maines some slack for that comment she made on a London concert stage three years ago?Maines’ infamous line–delivered with more wink-and-a-smile than righteous wrath–was this: “Just so you know, we’re ashamed the president of the United States is from Texas.” To many it sounded like a reasonable thing for a Texan to say, if the Texan was angry about the imminent optional war in Iraq becoming a reality.

Once the bloggers and the right-wing commentators got hold of it, however, millions swore off the Chicks’ albums and cried treason, or worse. Bush-friendly (or Bush-fearing) media conglomerates jumped on the bandwagon and suddenly the Chicks’ music was not to be heard on country radio, virtually anywhere. Then came the death threats.

Barbara Kopple and Cecilia Peck give you the story of the Chicks’ fall and rise without turning their film into a hagiography. Like any road diary, this one has a persuasive fly-on-the-wall appeal. Backstage after the fateful 2003 London concert, just before the American-led invasion of Iraq, Chicks manager Simon Renshaw pronounces the tour launch a success. The phrase he uses, a long while before the president used it in quite another context, is: “Mission accomplished!”

With alarming speed, the band becomes branded as anti-American floozies who don’t know when to zip it. They slip out of their country fans’ embrace. Maines and her stalwart fellow Chicks, Emily Robison and her sister, Martie Maguire, are faced with the big questions: Who are we anymore? Why does the other party have the monopoly on trash talk? Maines, whom even her closest pals would describe as mouthy, remains defiant to the end. But you sense in “Shut Up & Sing” the band members have toughened up plenty these last three years, while discovering what they’re made of.

You can take the film as inherently political, a rich companion piece to Kopple’s “Harlan County, U.S.A.” and her meatpacking strike elegy, “American Dream.” You can take it as a rousing defense of free speech even at the expense of stridency and unpopularity. You can take it as a pleasurable wallow in some fine and mellow music.

It’s also a plaintive portrait of touring life, as lived by three performers (and mothers, and wives) and their comrades, as well as a chronicle of the doubts plaguing any performer or writer trying to make their peace without shutting down–or up. We’ve had some fine music documentaries in recent years and some fine documentaries dealing with the Iraq invasion. “Shut Up & Sing,” a seriously entertaining highlight of the fall season, bridges those two genres.