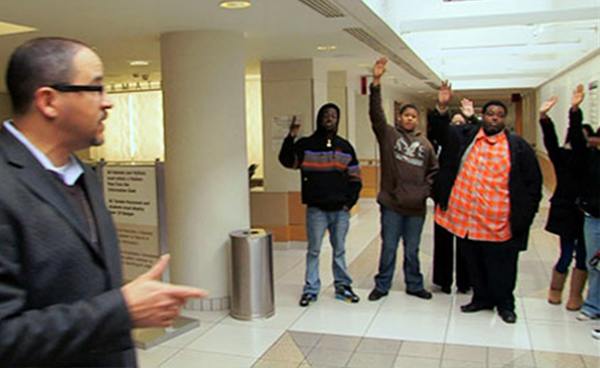 Colin Goddard never intended to become a multimedia star. But he also never guessed, sitting in French class at Virginia Tech one April morning, that he would survive being shot four times by Centreville’s Seung Hui Cho. Of the 17 people in his classroom, 10 died.But at the time of the Virginia Tech shootings in 2007, accomplished documentary filmmaker Barbara Kopple already was focusing on the issue of guns in America. Goddard is now at the center of that 90-minute film, “Gun Fight,”which premieres Wednesday night on HBO, three days before the fourth anniversary of the Tech shootings.

It’s a remarkable movie because it gives extensive, almost equal, time to gun rights advocates. The film begins in Blacksburg but then moves to Northern Virginia where gun supporters had a free gun raffle at the Mason Government Center in Annandale not long after the shootings — partly in response to New York Mayor Michael Bloomberg’s criticism of Virginia’s gun laws.

The man who won the raffle is asked by someone at the event what he would say to Mayor Bloomberg. He makes a non-family-friendly gesture with is fist in an upward motion, and the raffle participants roar in approval.

Over the course of Kopple’s four years of filming, gun rights advocates won two major Supreme Court victories, striking down gun laws in D.C. and Chicago. “It’s been a great three years,” says Alan Gottlieb of the Second Amendment Foundation, smiling broadly at the camera. Pushing forward, Larry Pratt of Gun Owners of America tells an interviewer, “There shouldn’t be any federal gun control law. There should be no federal jail, there should be no FBI, just OUT.”

The other side of the coin is dramatically shown: shooting victims wheeled into emergency rooms, screaming; 911 calls from people who accidentally shot loved ones; thugs in Philly showing off their collection of “jawns” (guns); the crushed families of Virginia Tech victims.

Meanwhile, Goddard went back to Tech – got a B in that French class – and graduated. After another school shooting, at Northern Illinois University, he contacted the Brady Campaign to Prevent Gun Violence and offered his services.

He also has testified before Congress, weighing in on the need to close the “gun show loophole” and other gun control matters. He does interviews with reporters. And he listens patiently, after each of his public speeches, as other victims approach and share their pain.

The psychological blowback from a shooting – not just the direct victims but the witnesses and those nearby – is “a tragedy that not a lot of people have talked about,” Goddard said. He said one of his French classmates escaped unscathed and staggered up to an officer, asking what to do. “The cop told him, ‘Go home,’” Goddard said. And he kept his anxiety and confusion bottled up until seeing Goddard at a recent speech.

The film raises points that Goddard, by now, has heard a number of times. If some students had been armed, gun supporters say, Cho would have been stopped sooner. “It was gun control that contributed to the tragedy of Virginia Tech,” Pratt says in the film.

“When you’re there and a man is pointing a gun at you,” Goddard says in the film, “it’s an absolutely different thing.” The film shows an exercise done by ABC’s 20/20, in which armed, trained students were unable to respond to a sudden intruder.

So now Goddard lives on Capitol Hill when he’s not traveling, and tries to push on in the face of the mighty NRAand its many well-organized supporters.

“I never expected to get to this level,” Goddard said. “This has turned a negative into a positive… I’m much more aware of the system we have in this country, how illegitimate it is, how much of a risk it poses to all of us and that I was face-to-face with on April 16th.”