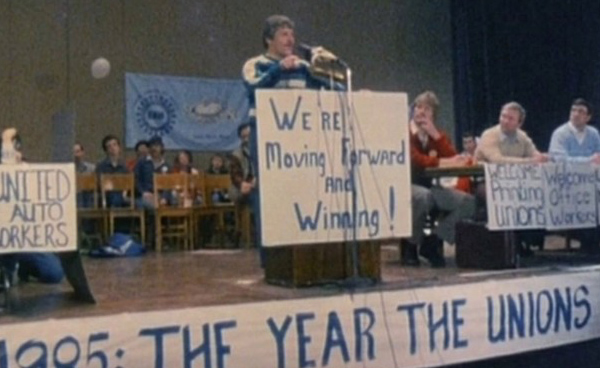 In 1984 the Hormel meat-packing company offered its Austin, Minn., union workers a new contract in which their wage would be cut from $10.69 to $8.25 an hour, and other benefits would be cut by 30%. The workers were not overjoyed. The company had just declared an annual profit of $29 million, and the cuts seemed inspired by a management desire to maximize profits at the cost of any other consideration.The people in this film are so real they make most movie characters look like inhabitants of the funny page. Families are torn apart. One brother goes back to work, another stays on the picket lines. Workers have tears in their eyes as they describe not being able to support their families. It becomes clear that no possible win by the members of P-9 could compensate them for the wages they have already lost – especially as they are striking, not for a raise, but against a pay cut. A notability creeps onto the scene, as people make enormous financial and personal sacrifices simply for what they believe is morally right. Our hearts are torn, because on the basis of this film, we are not sure they have chosen the wisest path.

Stories like the Hormel strike are too long and complicated to be told on a daily basis. Only a documentary like this has a canvas big enough for the whole picture.

Is there a lesson at the end of “American Dream”? I think there is. I think the lesson is that American tradition of collective bargaining will break down if companies can simply ignore a legal strike, hire replacements, and continue as before. There was a time in American history when such behavior by management would have been seen as not only illegal but immoral. The new management philosophers who won ascendence in the 1980’s dismiss such views as sentimentalism. They are concerned only with the bottom line, where they see profits, not people. The White House announced that for a recent overseas trip, the video library on Air Force One was stock with “Gone with the Wind.” Next flight, could they take along “American Dream”?

* only film to ever win all the awards at Sundance